Genetic reports featuring fast, easy solutions are the norm. They are ineffective and potentially dangerous. Your body is beautifully complex and so should be your genetic report.

At first glance, you’ll quickly see how beautifully complex your StrateGene® Report is. You are holding an actual map of yourself. You’ll learn which of your genes work slowly, which work faster and how each of your genes are impacted from every day influences such as stress, infections, inflammation and nutrient deficiency.

Propel yourself towards understanding You for the first time ever. You’ll appreciate that we provide you a complete set of tools – your StrateGene® Report, your Dirty Genes book and short educational videos in our Education area. 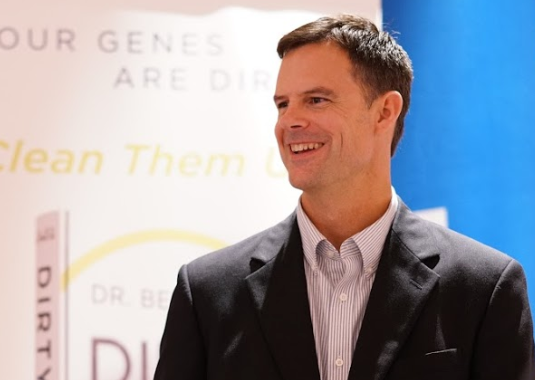 Dr. Ben Lynch helps people optimize their life. He does this by developing tools which enable people to truly understand themselves – all the way down to the genetic level.

Dr. Lynch’s Story:
How I Became a Genetic Pioneer

I first discovered the power of epigenetics in 2008. That was it for me—I never looked back. At the time, I was a Doctor of Naturopathic Medicine, graduate of Bastyr University, with a special interest in environmental medicine—helping people recover from the assaults of industrial chemicals, heavy metals, and other environmental exposures. When I discovered what a big role genes played in this whole process, I began eagerly reading every scientific paper I could get my hands on.

I quickly realized that there was a huge gap between what the geneticists published in their research papers and what the medical providers practiced in their offices. The scientists were ridiculously far ahead of doctors and nurses, who often had no idea how to help their patients respond to genetic variations or even to follow the basics of good gene health. Nor did practitioners have any idea how to create a targeted program geared to specific genetic variations.

I made it my mission to bring cutting-edge science right into the doctor’s office. I threw myself into genetic research, chasing down any article or paper that could shed any light on what we regular folks could do to improve our health. I began working with individuals whose health-care providers just weren’t giving them the help they needed. And I started to give seminars, webinars, workshops, and talks so that practitioners could learn how to help their patients.

In a remarkably short time, I had established myself as the go-to guy on treating genetic variations through diet, supplements, and lifestyle.

In 2011, I founded Seeking Health®, a research-based company producing high-quality supplements targeted to particular health issues. I’m proud to say that in 2015, I was named Number 37 in Inc.’s list of 500 Entrepreneur Superstars from America’s fastest-growing private companies and Number 1 in Washington state.

Seeking Health® continues to grow and serve both health professionals and the public worldwide.

After 23andme launched, a myriad of genetic reports hit the market. At first, Dr. Lynch was excited about them but then, over time, he realized how ineffective they were. Report after report was riddled with errors, unscientific and not looking at the whole picture.

Genetic reports were hurting people, putting fear in their heads and confusing health professionals. In 2015, Dr. Lynch developed StrateGene® out of necessity. He knew that genetic testing was a useful tool. It just needed someone to integrate research of not only genetic variations but also how each gene is influenced by lifestyle, diet and the environment.

StrateGene® is regarded as the go-to genetic report due to the scientific integrity and big picture presentation.

Wanting to improve StrateGene®, Dr. Lynch and his research team continued to scour the literature for genetic variations which were common, well-researched and made a significant impact in how a gene functioned. Over a period of a few years, he and his team identified hundreds of genetic variants that no testing company was reporting to people. This led Dr. Lynch to develop his own genetic test. Now, for the first time, hundreds of genetic variations, which are important for people to know about, will be identified by the new StrateGene® Genetic Test.

At Seeking Health®, we believe there is a fundamental step missing, almost 100% of the time, in today’s healthcare system. A consistent focus on treating symptoms, rather than building health, can mean that you cycle in and out of symptoms and “treatment” over and over, sometimes for years. The root cause for many health conditions and symptoms stems from ineffective digestion and poor diet, along with other issues like environmental exposures, sleep issues and even a lack of community.

Supporting you to optimize your digestion, reduce environmental exposure and toxic burden, and optimize your diet so nutrients can flood in, is our path to increasing energy and helping your immune system and overall health.

If you support your body’s built-in systems, especially digestion and mental health, with pure, highly absorbable, well-formulated nutrients, your ability to remain healthy and happy significantly increases. We want your foundation rock-solid, and we provide the tools to help you make it so.

We are here to see you constantly and consistently improve your life and health. Your body is a healing machine. It is literally made that way. Our true passion is prevention. If we can prevent disease and promote health through educating you and others on how to build and maintain a solid foundation, then we’ve accomplished our goal.